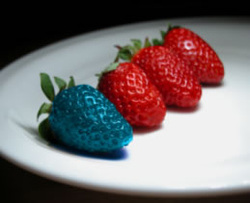 Genetically Modified Strawberries
One of the more prevalent controversies is in regards to a medical application of gene therapy--genetically modifying foods and organisms (GM). Many fear that GM crops carrying genes from other species, might harm the environment or be hazardous to human health. However, researchers may be able to prevent the escape of plant genes, for example, by engineering plants so that they cannot breed. In addition, the U.S. National Academy of Sciences released a study that found that these plants and organisms posed no threat or risks to health or environment, and as a matter of fact, in the United States, all genetically modified "projects" are evaluated for potential risks by several regulatory agencies, including the Food and Drug Administration, the Environmental Protection Agency, the National Institute of Health, and the Department of Agriculture. 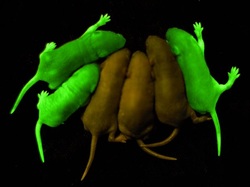 Glow-in-the-dark gene from jellyfish inserted into mice.
Human gene therapy, is predicted based on results in lab animals. It is those experiments that determine, partly, why certain genetic diseases are not good candidates for gene therapy and which diseases may be approached by gene therapy. However, although genetic engineering of gametes (germ line therapy) has been accomplished in lab animals it has not been attempted in humans because such procedures would raise very difficult ethical questions about altering evolution. In addition, there will always be patients who suffer from genetic diseases, because new mutations will always occur, making it impossible to eliminate genetic defects. 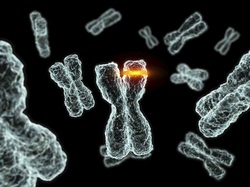 A mutated fragment of a chromosome
There are several genetic diseases that make poor candidates for treatment by gene therapy which include:

The button below will lead you to a site that shows several of the many deficiencies that can be cured by the use of gene therapy.
List of Deficiencies

The factors that are taken into consideration of which application of human gene therapy might be approved include efficacy, safety, reliability, alternatives, and severity of symptoms; nonetheless, each criterion varies between each individual patient.

Many of the ethical and religious concerns expressed about human gene therapy refer to the procedures that might affect the germ line and result in  inherited changes. However, treatment of somatic cells does no pose ethical problems different from those represented by other new types of experimental therapy. Some of these similar concerns include: