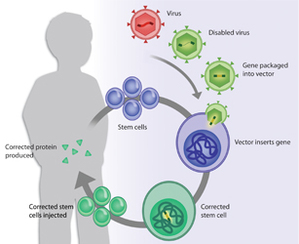 The mechanisms that undergo the process of gene insertion includes:

—If the procedure succeeds, the cells will multiply permanently and produce a steady supply of the missing protein, curing the patient.

Human gene therapy, in general, refers to the overall process of correcting a human patient's specific genetics defects by replacing the defective gene with new genetic material such as replacement of the defective gene in bone marrow cells of a child affected by a genetic immune deficiency. Human gene therapy should not be confused with genetically enhancing general characteristics such as behavior, intelligence, or physical appearance. The sole purpose of human gene therapy is not to disrupt the gene pool and provoke the public, but instead it is based on the foundation of correcting genes.

A great example of the use of gene therapy as an alternative is seen in adenosine deaminase (ADA) and purine nucleoside phosphorylase (PNP) deficiencies. Severe immune deficiencies such as these can be treated by bone marrow transplant and the potential risk and cost are high. As an alternative, both diseases can be treated by somatic cell gene therapy by removing the affected patient's bone marrow cells, inserting normal genes for the enzyme into them, and returning the treated cells to the patient where they could grow and possibly produce enough of the desired enzyme to deteriorate the toxic chemicals; this would restore immune functions within the cell.

The public's concernment with human gene therapy is that is has the possibility of bringing about heredity changes. Nevertheless, gene therapy can be undergone in two distinct ways:

The difference between somatic and germ line therapy is which type of cells are treated with DNA. Germ cells are the only cells that can cause heritable changes that pass on to later generations, thus the procedures of somatic cells would not alter future gene pools. Despite science's advancement in technology, germ line therapy could not raise new ethical problems because it would be eliminated as an application of human gene therapy. Moreover, direct genetic alterations have been applied in bacteria, yeasts, fruit flies, and some mammals.

The main role of germ line treatment is correcting genetic defects of an early embryo. Consider the same example of ADA and PNP deficiencies; rather than treating bone marrow by somatic cells, germ line therapy inserts the correct genes into the affected embryo within hours of fertilization. Because this would lead to the effected embryo displaying the normal gene in all cells, later descendants of the patient are less likely to be affected by such diseases--a potential benefit.

Overall, somatic cell therapy only treats patient's organs thus only affecting the patients, not their offspring; meanwhile, germ line therapy produces genetic changes that may be present in the patients children. On a final not, genetically altering the germ line is not unique and only present in gene therapy, it is also present in several other medical practices such as vaccination, cancer, chemotherapy and radiation, all which include the same risks.