A common effect of an increasing commercial interest, as well as a progressive movement in technology, is the rising concern among religious leaders.

The general secretaries of three large religious bodies--the U.S. Catholic Conference, the Synagogue Council of America, and the National Council of Churches--sent a letter to President Carter in 1980 in which they expressed [their] concern that prowess might surpass prudence in the human application of genetic technologies. They have stated that this era has entered a state of fundamental danger triggered by the rapid growth of genetic engineering.
--President's Commission, page 7

A Letter Sent to President Carter, 1980

The letter sent to President Carter in 1980 by these religious leaders included a broad range of concerns including risks and benefits, control of experimentation, and consequences. The President's Commission responded by investigating the uses of rDNA. "A resolution signed by 56 religious leaders and 8 scientists and ethicists rekindled interest in human genetics when it was sent to Congress in June of 1983." The resolution condemned all uses of germ-line therapy, the use of gene therapy through sperm or egg cells. Several drafts of the background paper [on human gene therapy] were widely circulated for external criticism before and after the workshop, resulting in review by more than 70 ethicists, scientists, religious and civic leaders, and other concerned parties. Drafts were also distributed for review at the National Institute of Health, the Food and Drug Administration, to all members of the Working Group on Human Gene Therapy of the Recombinant DNA Advisory Committee of the National Institute of Health, and to other government agencies."
--U.S. Congress OTA, page. 12.

Religious Views of the Matter

"We support the use of genetic technology meeting fundamental needs for health, a safe environment, and an adequate food supply.
We support human somatic gene therapies that prevent or minimize disease and its effects. These therapies should be limited to the alleviation of suffering cause by disease.
We oppose both somatic and germ-line therapies when they are used to provide only cosmetic change or to provide social advantage.
Because of its long-term effects are uncertain and the possibility of abuse, we oppose gene therapy that results in changes that can be passed to offspring." 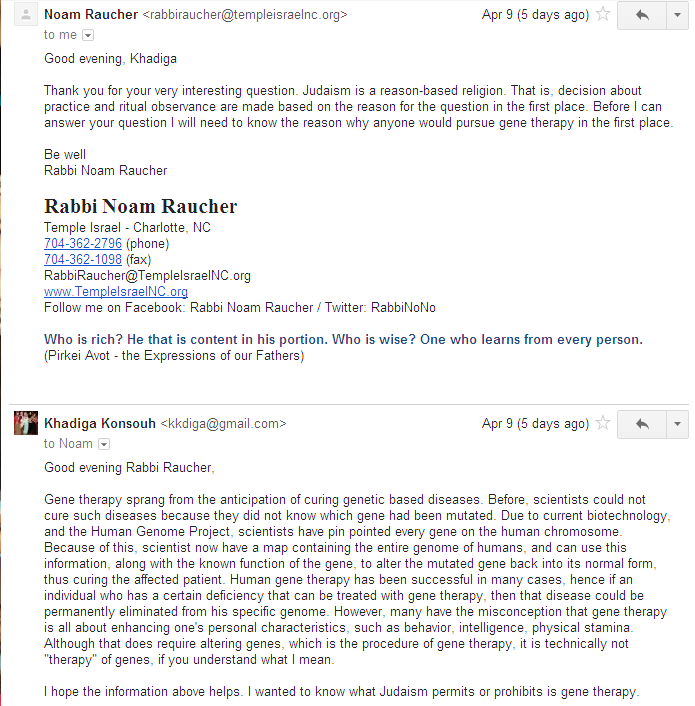 Click to set custom HTML
"It is my understanding that as Jews, we are obligated to seek healing from doctors if we are ill. While prayers and other religious rituals are encouraged, they are only to be supplemental to and not used as a replacement for traditional medicine. That being said, I was curious on what Jewish Law stated about genetic testing and gene therapy. So I did a little digging. My first stop was to Chabad.org, which is where I usually go for the answers to my Judaic life questions. I know, from a dear friend, that genetic testing is encouraged due to fatal illnesses such as Tay-Sachs disease; which several articles at Chabad.org verified.

What I didn’t know was that Jewish Law allows, not only for genetic screening, but for genetic therapy as well. According to a published article from the Department of Medicine at Mount Sinai Services at Queens Hospital Center in New York if a genetic disease can be cured by gene therapy / surgery then it is permissible by Jewish Law.

Here is the abstract of the article:

Genetic screening, gene therapy and other applications of genetic engineering are permissible in Judaism when used for the treatment, cure, or prevention of disease. Such genetic manipulation is not considered to be a violation of God's natural law, but a legitimate implementation of the biblical mandate to heal. If Tay-Sachs disease, diabetes, hemophilia, cystic fibrosis, Huntington's disease or other genetic diseases can be cured or prevented by "gene surgery," then it is certainly permitted in Jewish law. Genetic premarital screening is encouraged in Judaism for the purpose of discouraging at-risk marriages for a fatal illness such as Tay-Sachs disease. Neonatal screening for treatable conditions such as phenylketonuria is certainly desirable and perhaps required in Jewish law. Preimplantation screening and the implantation of only "healthy" zygotes into the mother's womb to prevent the birth of an affected child are probably sanctioned in Jewish law. Whether or not these assisted reproduction techniques may be used to choose the sex of one's offspring, to prevent the birth of a child with a sex-linked disease such as hemophilia, has not yet been ruled on by modern rabbinic decisions. Prenatal screening with the specific intent of aborting an affected fetus is not allowed according to most rabbinic authorities, although a minority view permits it "for great need." Not to have children if both parents are carriers of genetic diseases such as Tay-Sachs is not a Jewish option. Preimplantation screening is preferable. All screening test results must remain confidential. Judaism does not permit the alteration or manipulation of physical traits and characteristics such as height, eye and hair color, facial features and the like, when such change provides no useful benefit to mankind. On the other hand, it is permissible to clone organisms and microorganisms to facilitate the production of insulin, growth hormone, and other agents intended to benefit mankind and to cure and treat diseases.

As I said before, I am a very spiritual person and believe that each person has a path in life they must take. One of my core beliefs is that people and situations are placed on your path in life for a reason. Some are put there as a lesson for you to learn, others are there for you to teach. Some come and go because you (or they) need reminders of a particular lesson. A few stay because either you or they are just too stubborn, or just plain clueless, to hear and learn the message.

If you are lucky enough you see, feel, taste, and retain the valuable lesson you were meant to learn. You come to a peaceful realization of why this person was (is) in your life or why you just went through a situation. You become thankful, grateful even, that they continue to be in your life. Or... you are just so freaking appreciative that the lesson has been learned and are ecstatic that they are gone.

I have been blessed to have that and more in my life. Everyone and everything we encounter has the potential to teach us something about who we are meant to be... who we want to be. The trick? Recognizing, appreciating, and allowing the people to move on and off your path without stopping the journey.

I guess what I am trying to say is that I believe that as humans, we need to do what is right for ourselves. For some that means following religious law, for others it’s knowing the rules and bending them as needed."

In The Name of Allah, Most Gracious, Most Merciful.

All praise and thanks are due to Allah, and peace and blessings be upon His Messenger.

Indeed, the question you have raised is very interesting, especially at this time that scientific technology is at its fastest speed. It is the duty of Muslim scholars to shed light on such issues and keep Muslims informed about the ethical guidelines regarding such modern issues.

Gene therapy is one of the modern issues approved by Muslim jurists as long as it is done in accordance with the objectives of the Shari`ah. There are certain conditions and guidelines that govern the use of gene therapy atop of which is that there should be no harm inflicted in the course of conducting such therapy. It should be used solely for treatment purposes (i.e. it should not be used to promote destructive purposes). Also, it is safe and permissible to use the gene therapy in agriculture and what benefits human beings in general. Also, it is not permissible to use that gene therapy in a way that leads to any future bad effect on man’s progeny.